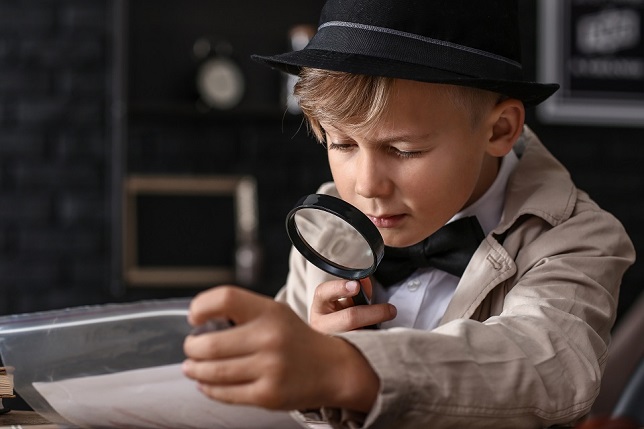 Junior Detectives is a fun Murder Mystery experience for children. Professional actors will deliver the plot with an opening scene and then a chance for children to meet all of the suspects and question them, attempting to solve the case by finding Method, Motive and Murderer.

The experience lasts for two hours and it will be hosted by police Inspector Catchem. There are four suspects and the audience will move around the venue meeting them and questioning them. Each participant will have the opportunity to ask questions, and to meet with the Inspector who will share clues and give them pointers in the right direction. If your child enjoys Sherlock Holmes or Agatha Christie's stories this will be right up their street!

The Mystery of Smugglers Cove

Flaskers Manor is an old house which sits above Smugglers Cove. Two hundred years ago the cove was a favourite location for smugglers, who would bring illicit goods ashore in small boats in the dead of moonless nights to avoid paying duty in port. The cove has many caves and passage ways which the smugglers would hide their booty in.

The current owner of Flaskers is the mysterious Professor Windebanks, a scientist who has developed various weapons for the British government. His body has been found in his study, and top secret plans have gone missing. On the night in question a storm brought down a huge tree which blocked the one and only access to the house. This has now been cleared, to give access to those investigating the case.

The four house guests who were present on the night on which the Professor was murdered remain in the house while the investigation continues. Reverend Neil Allday-Long, Lady Hamwich, Captain Russell Sprout and famous singer Sarah Nader all have a connection to the victim. They must be questioned to find out what this connection is, whether they have connections to each other, and whether they have a motive for committing the crime.

The price is £30 per ticket, or £96 for a family of four. Dates and venues will be announced shortly.